A few years ago our office had the privilege of representing a family of five who lost their daughter/sister in a tragic drowning accident at a local lake. The case was difficult from a liability standpoint and hotly contested. Throughout the years spent representing this wonderful family we developed a close friendship.

Just prior to trial we were able to settle the case for a very sizeable amount. Even at the time of settlement this family was still emotionally devastated as a result of their loss. They never focused on the amount of the settlement and simply preferred to rely upon the law firm’s judgment. At the conclusion of the case we were able to structure the funds for the minors in annuities that would provide them payments for almost the entirety of their lives. This was important to the parents because they wanted to make sure that their children could attend the schooling of their choice. As a result of the monies received during the settlement the family purchased a ranch in Mexico and moved out of the country. We were sad to see them go.

It was with great pleasure that our office received a phone call from the two oldest daughters stating that they were in California visiting relatives and would like to drop by the office to say hello. The picture below says it all. 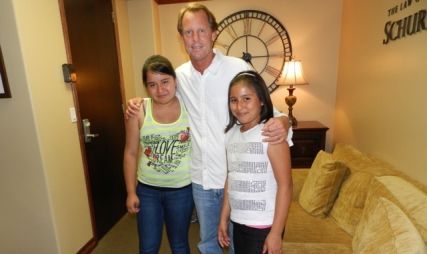