If a City or a County fails to keep sidewalks that they are responsible for in a safe condition, the answer is yes. However, the laws that apply to governmental entities are different than those against private parties and it is important to have legal representation that is familiar with these differences.

Often, sidewalks become cracked, damaged and displaced. This can create gaps in the sidewalk or create an extremely uneven walking surface that creates a significant danger to the general public walking on these sidewalks. The photographs below depict sidewalks where The Schurmer Firm clients have tripped and sustained injuries. 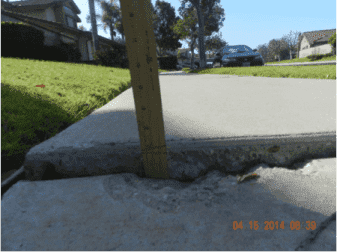 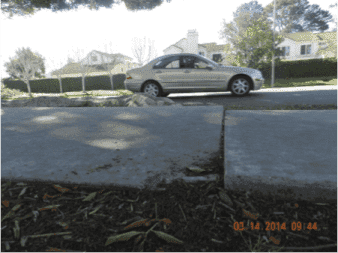 Government Code section 835 is the basic code section that speaks to what we must prove in these types of cases. Essentially, we must show that the sidewalk was in a dangerous condition, that the dangerous condition caused the injury and that the dangerous condition created a risk that someone would sustain the type of injury that they did. For example, if a sidewalk is displaced and creates height differentials like shown in the above photographs, most people would agree that the condition was dangerous. If a person walking on the sidewalk trips because their foot gets caught on or hits the sidewalk height differential, and falls to the ground and fractures his or her arm, most people would agree that the condition caused the person to break an arm and that it was foreseeable that an injury like that would occur.

Often, there is much disagreement about whether the condition is dangerous. Defense lawyers like to argue that height differentials, cracks or defects fit within what is called a “trivial defect.” Many California courts have held that where height differentials are ½ inch or less, that as a matter of law the condition is not dangerous and should be considered a “trivial defect.” Fortunately, many courts have held that although height differentials are only one factor to consider, one must look to the totality of circumstances including lighting, weather, prior accidents, jagged vs. smooth edges, shadows, and other factors. Again, in light of these many factors, it is important to find attorneys that handle these types of cases so that you are adequately represented.

Occasionally, the landowners adjacent to the dangerous condition might also bear some responsibility and must be added to the lawsuit. There may be a split of responsibility between the adjacent landowner and the City or County.

There are a number of complex issues that arise in premises liability cases against public entities. It is critical to be represented by attorneys who have significant experience in this area.